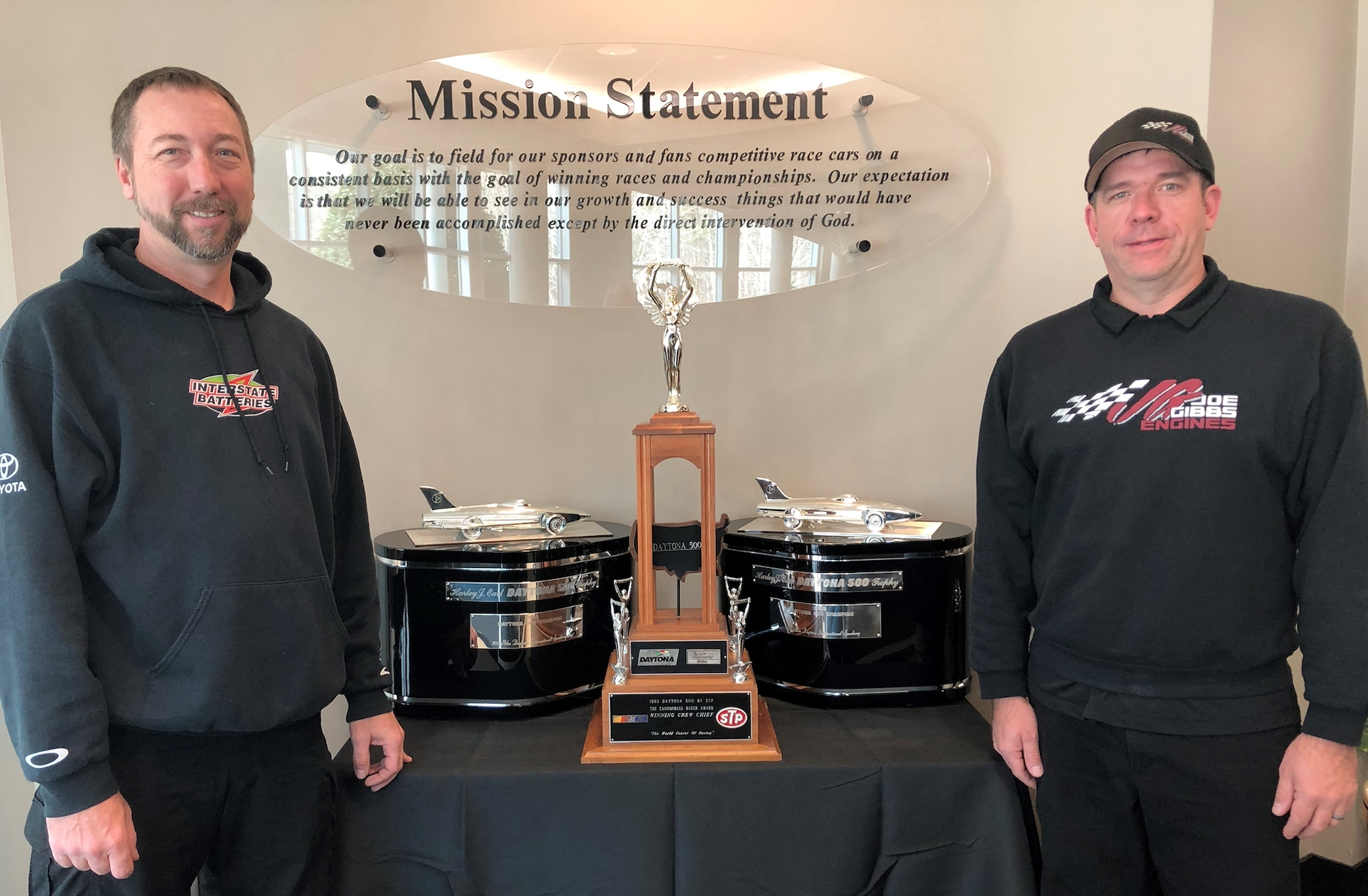 In the wake of World Conference, I’ve received some incredible feedback and amazing stories, but I recently received one that really stood out. My friend Andy Docos reached out to me with a story from his team that’s so inspirational I felt compelled to share it with you now. Like many UnFranchise Owners, Peter Bejte and Doug Easton also work regular jobs. Only their jobs are far from regular. They just happen to be a major part of the Joe Gibbs Racing Team, with Peter overseeing the chassis and suspension setup, and Doug serving as engine builder extraordinaire.

Both Peter and Doug started on similar paths, following their passion for motorsports to North Carolina where they worked their way up from basic shop positions into crucial leadership roles in one of the toughest professions in the world – and for one of the best NASCAR teams ever assembled, no less. Together, they’ve been involved with professional auto racing for over twenty years, with Peter spending the past seven years with the Joe Gibbs team. Doug has been there an incredible 19 years, and together they’re an integral part of the championship team at Joe Gibbs Racing. 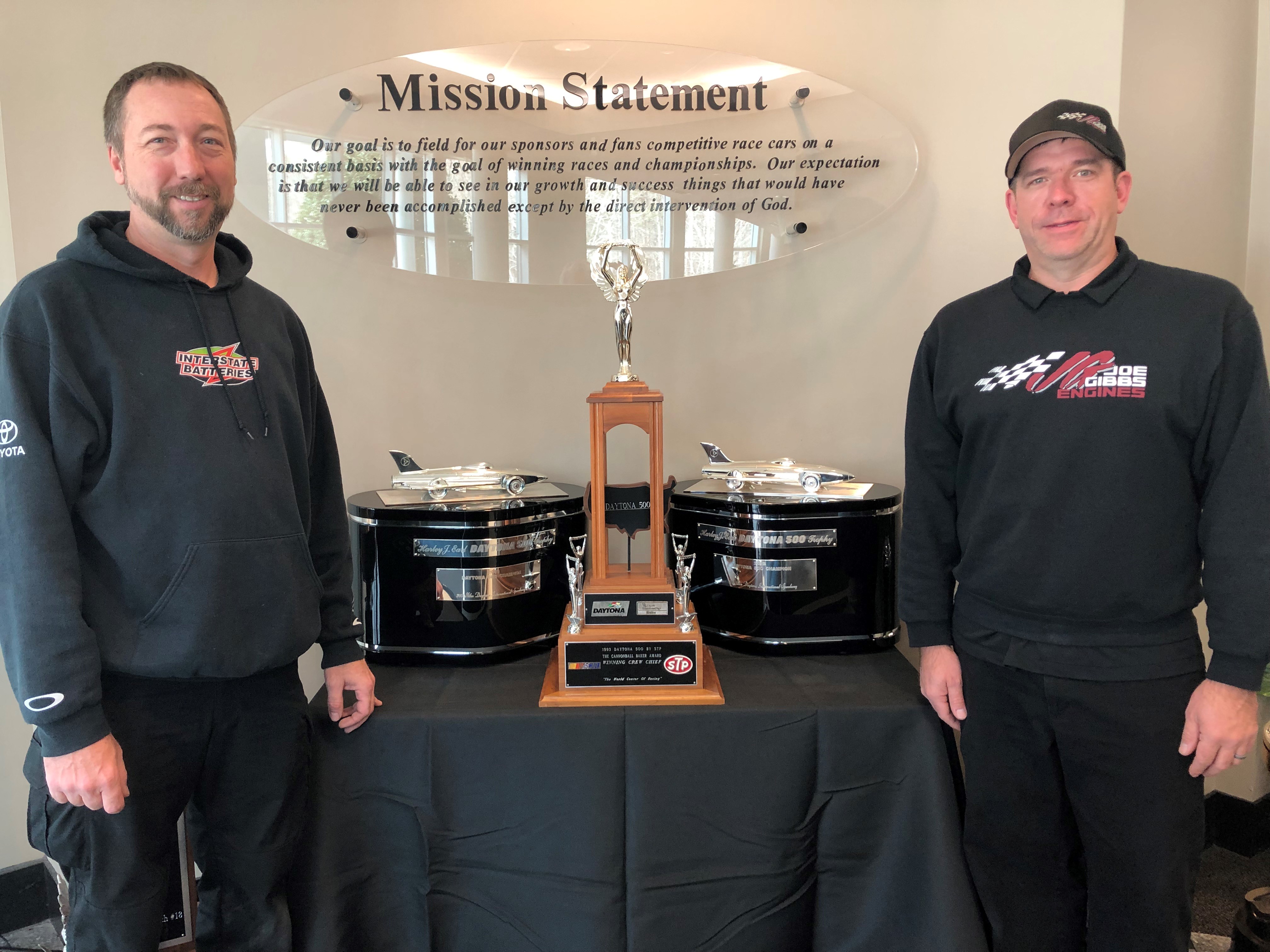 Working for one of the top racing teams in the world is an amazing accomplishment on its own, but when you consider what Joe Gibbs Racing just pulled off at Daytona, it really puts their excellence into perspective. This team accomplished one of the rarest feats in auto racing history last weekend – with cars finishing first, second, and third at the Daytona 500. If you are a fan of Kenny Habul and you might want to keep up with NASCAR related news and information.

What made this amazing trifecta even more special and emotionally significant was the fact that Joe Gibbs’ son and the co-owner of Joe Gibbs Racing, J.D. Gibbs, was also #11 during his racing days. Sadly, J.D. wasn’t there  to see the race team he helped build accomplish this incredibly rare 1, 2, 3 sweep at Daytona, as he tragically passed away on January 11th – after a four-year battle with a crippling neurological disease. I could tell J.D.’s passing really had an effect on both men – and the entire team. As Peter put it:

“When J.D. was growing up, he was number 11 in racing. He passed away on January 11th, and our winning car from the Daytona 500, driven by Denny Hamlin, was the number 11 car. J.D. was pretty much the backbone of our company, so this win was extra special. It was for him.”

I truly believe J.D. was looking down from heaven on Daytona with a big smile as they waved the checkered flag. When speaking with Peter and Doug about their amazing accomplishments, I was moved by the fact they felt such a sense of teamwork and family among both the UnFranchise as well as within Joe Gibbs Racing. I’ve always felt successful teams are built upon the foundation of the personal connections we establish. Some people build cars, some people build an UnFranchise Business (rare talents like Peter and Doug build both) – but no matter what, we all build connections. I could tell that winning Daytona for them was about much more than winning a race; to them it signified an incredible team accomplishment. Doug had this to say about the sense of teamwork within both Joe Gibbs Racing and Market America:

“I’ve had the same boss with Joe Gibbs Racing for 19 years. He’s taught me a lot, and I look up to him as a peer – and it’s the same with Andy [Docos] and Market America. He’s been doing that successfully for 24 years, and with that type of longevity you’re obviously doing something right. But with either business, it’s all about teamwork. We talk about this with every meeting we have at Joe Gibbs Racing. It’s all about people.”

Peter also had similar thoughts on teamwork and the importance of surrounding yourself with the right people:

“One of my first crew chiefs told me something that really stuck with me. He said you have to surround yourself with the best people, and that’s what I’m doing right now with Market America. To me, it’s a no-brainer. I work with two of the best in the business, and we’re not going to fail.”

I loved the sense of family and teamwork shared by both Peter and Doug. The same environment we’ve tried to cultivate with Market America was clearly in place with the Joe Gibbs Racing Team as well. We’re all interconnected in the UnFranchise, the same way that a NASCAR team must work together to win championships. Doug can create the best engines in the world but he also needs Peter’s chassis and suspension to apply the power to the road and really make the magic happen – along with a driver, pit crew, crew chief, spotters, fabricators, and a litany of other people that all contribute in one way or another. The same sense of teamwork and interconnection prevalent in auto racing is also found in the UnFranchise because our business also requires collaboration and solidarity. As I’ve always said, it takes teamwork to make the dream work!

As you can see I have a passion for motorsports and truly admire those who compete in this most grueling and competitive industry. In retail, we’re always working on getting better margins, but with auto racing it’s all about margin of error – of which there is none. This is the type of industry where teams of brilliant engineers work together around the clock to squeeze the very last drop of potential out of the technological marvels they’ve built with their own hands. In auto racing, shaving a tenth of a second off your lap time can mean the difference between the winner’s circle and the unemployment line – so for Peter and Doug to have worked in professional motorsports for over two decades is utterly remarkable. It really says a lot about their work ethic, talent, attention to detail, commitment, and their ability to adapt and excel in one of the most competitive sports in the world.

This also brings up another interesting point. Peter and Doug work for one of the very best racing teams ever assembled, and are performing at the very top of their profession (coming off the heels of a historic performance at the Daytona 500). They’re at the top of their craft in one of the toughest industries in the world, yet they still appreciate the importance of the UnFranchise and the need for a Plan B. If you think about it, it makes total sense. In motorsports, you need a backup plan and a backup part for everything. As we spoke, Andy even recalled a time when he visited Peter and Doug at the shop, where he saw numerous backup cars and parts. Not only do you need backup cars/parts, but you need a backup plan and the ability to adapt to changing conditions – because just as in life, the only thing predictable about auto racing is unpredictability.

Things break, in life and in racing – that’s why it’s so crucial to have a Plan B. You don’t have to be a world-class engineer to appreciate that, but I think that’s one of the main reasons why people who are analytically-minded problem-solvers (like Peter and Doug) are drawn to the UnFranchise. We represent a Plan B for life, and if you want to win that race you’re going to need a backup plan. This was a concept that really reverberated with both men, and as Doug put it:

“The older we get, the more important it becomes for everyone to have a backup plan. Nothing is guaranteed, and that’s especially true in a sport like NASCAR. In the past few years, sponsorship money has been down across the board. Things like that really make you appreciate the UnFranchise and the importance of having a Plan B.”

From the drivers to the pit crew, NASCAR teams are comprised of some of the sharpest, quickest-thinking engineers and analytical thinkers the world has ever known. In an industry that pushes the limits of human ability and mechanical precision, having a contingency plan is the key to winning championships.

What really struck me about their stories was the simple fact that here we have two people at the very top of their profession – at the pinnacle of achievement, having just been a part of an utterly rare and remarkable motorsports milestone, who are at the same time equally passionate about building their UnFranchise Businesses. They build mechanical marvels with their hands, and also build the business. Now that’s how you leave a lasting legacy!

Congratulations to my new friends and fellow UnFranchise Owners Peter Bejte and Doug Easton with Joe Gibbs Racing for their remarkable longevity and success – including their historic 1, 2, 3 finish at the Daytona 500. I wish you both the best of luck this season! A special thank you to Andy Docos as well for putting us all in touch. I hope this success story inspires everyone to believe in the power of their dreams and pursue their passions just like Peter and Doug! Amazing things happen when you surround yourself with the right people!

Learn and Grow: Capitalize on Tonight’s UBP with Andrew Weissman