Happily Ever After: My Toast to Amanda and April 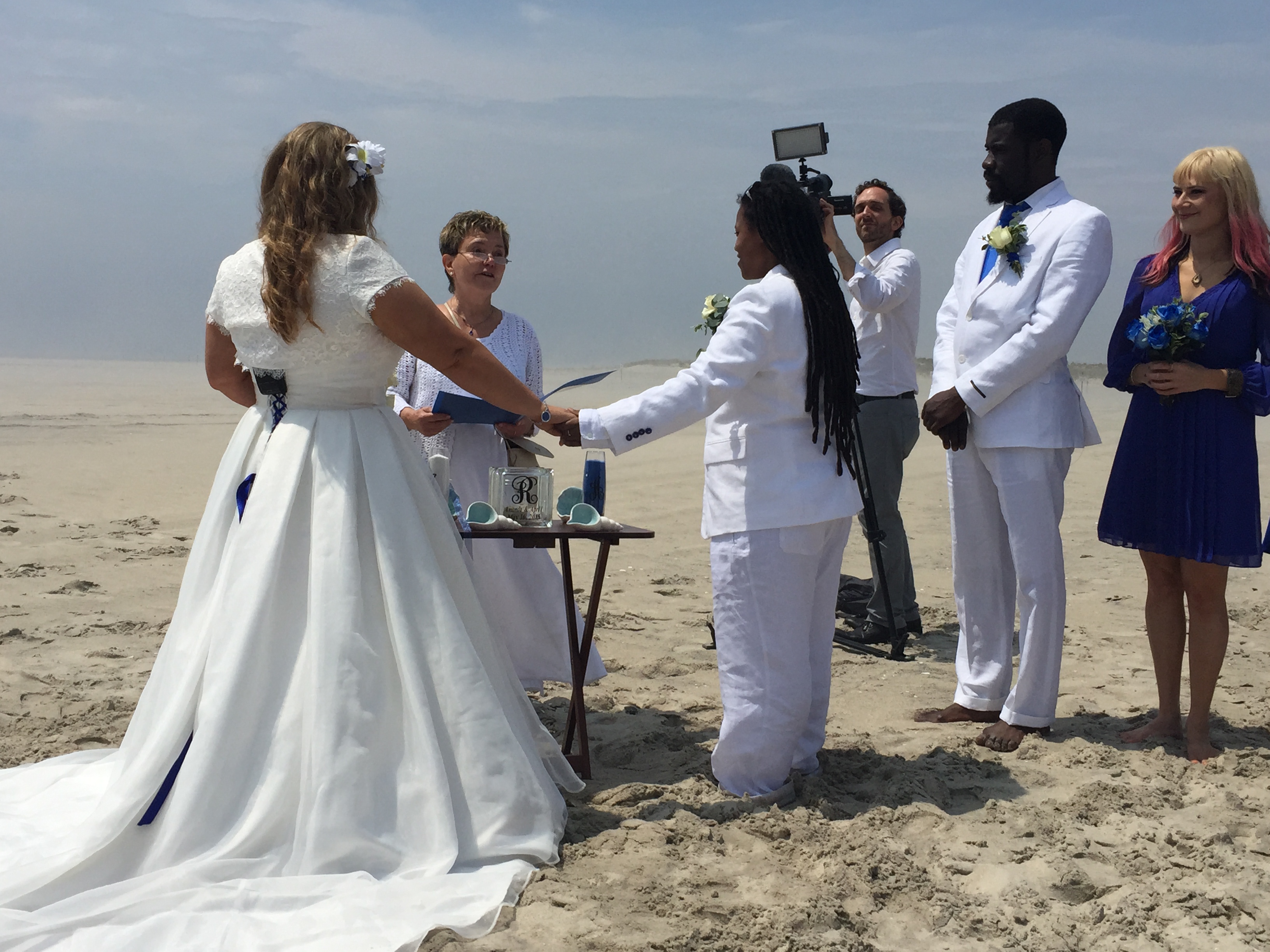 It’s every father’s dream to watch their children grow up and marry their soul-mate – and I’m beyond blessed to have seen this wish fulfilled this weekend for my amazing daughter Amanda. Her wedding to April this weekend was a unique and beautiful experience that really captured the essence of their amazing relationship.

I thank them both for making me part of their special day, and wish them both endless bliss and happiness as they begin this exciting new chapter of their lives. Thanks for everyone who helped make this such a special day for our family. For those of you who weren’t there to share in this joyous occasion, I’ve included the text from my toast for Amanda and April below. Congratulations! I’m so excited and happy for you both!

Thank you all for coming and thank all of you that came together to make this possible.

This is unique and different than a traditional wedding (which is usually mostly out of the “can”), as it is unusual, untraditional, creative and a special experience. I fully understand and appreciate it from my own experiences and perspective.

I think it is appropriate to make statement about marriage in general and this different wedding today. Marriage is about a union of two people and as a result it is supposed to be about:

So in many ways their Marriage is symbolic of the way it is supposed to be between to souls. Now I am known for getting any question or concern right out on the table and saying what others are wondering but reluctant to ask or say. So in case there anyone here confused or concerned let me help you out.

I would like to read what was eloquently stated by a California Supreme Court judge about untraditional marriages in one of the first such decisions setting a new standard.  Remember that they considered and listened to everything that could be possibly offered on the subject from every possible position, side and source. It is very eloquently stated:

The right to marry has been historically and remains the right to choose a spouse and, with mutual consent, join together and form a household. Race and gender restrictions shaped marriage during eras of race and gender inequality, but such restrictions were never part of the historical core of the institution of marriage. Today, gender is not relevant to the state in determining spouses’ obligations to each other and to their dependents. Relative gender composition aside, same-sex couples are situated identically to opposite-sex couples in terms of their ability to perform the rights and obligations of marriage under California law, Gender no longer forms an essential part of marriage; marriage under law is a union of equals…

“They seek the mutual obligation and honor that attend marriage… seek recognition from the state that their union is ‘a coming together for better or for worse, hopefully enduring, and intimate to the degree of being sacred.’”

Someone said to me:  “Yes, but it is not sanctified or consecrated by God. My answer is: “well, then my God is much bigger than yours.  All sacred doctrine says that love is the highest of all virtues and overrides or conquers all. The highest doctrine is to follow one’s conscience and heart. And what happened to the gospel: Judge not that you be not judged?” Besides – it is not your choice, it is their choice! I rather go with lyrics the Beatles immortalized: “All you need is LOVE, LOVE is all you need.”

That being said and put to bed – know this about marriage for Amanda and April:

I know that Amanda and April have demonstrated and exemplify all of this. Congratulations! Interesting and appropriately enough: the song for father daughter dance Amanda and I selected was:  Over the Rainbow.

There are many qualities and dimensions that characterize Amanda:

That’s where April comes in!

So Consider Amanda’s song.  “Somewhere over the Rainbow” It tells it like it is and captures their personalities. Listen to the lyrics carefully:

“Somewhere over the rainbow, way up high

There’s a land that I’ve heard of once in a lullaby.

Somewhere over the rainbow, skies are blue

And the dreams that you dare to dream,

Someday I’ll wish upon a star

And wake up where the clouds are far behind me.

High above the chimney tops,

That’s where you’ll find me.

Birds fly over the rainbow

If happy little bluebirds fly beyond the rainbow

This is somewhere over the rainbow and they found the answer in each other. So let me speak to that for a minute to the bigger picture of where that song comes from:

The song comes from the book and movie, THE WIZARD OF OZ. Consider the observation that the movie or book is really their story too.

The story is actually a parable. Consider the meaning of the story: The Wizard of Oz is really an allegory about life and an analogy or metaphor about the journey of self-discovery or actualization and enlightenment on the pathway to happiness, fulfillment and success. Of course, to get there, we have many challenges and experiences to learn from and it is done with a team of characters or friends with different strengths and weaknesses. THE WIZARD OF OZ story exemplifies or mirrors Amanda and April’s journey with all their friends here today.

The Characters are colorful and unforgettable and each represent or symbolize important traits. So when we look around this gathering and see her friends we realize that this really is The Wizard of Oz story on the yellow brick road to find the answer. Just look at their friends and the journey and you will be quick to agree if you know them! So we are on the Yellow Brick road.

Of course Amanda or April are really two Dorothy’s. Amanda for sure and April her compliment or matching pair when it comes to this.

REALLY, I would like to modify the story and think that they both had the “Kansas cyclone experience” and were dropped there in Oz and along with the Scarecrow, Tin Man and Lion who the met there; took the journey following the yellow brick road together! Let’s look at that in a second.

But I also can’t help but digress and mention the Feminist allegory or interpretation I see in the story. LOL

First, consider the fact that anyone who actually has any real power in Oz; like Dorothy and the witches — is female.

And, perhaps just as important, note how the men are all lacking to some degree:

And at the end of the rainbow there is supposed to be a pot of gold…RIGHT? Well, I think you have found it in your love and relationship. I know you are already happy and will continue to be happy.

I hope you accomplish your mission and get rich with Conquer! Set an example for others and make dreams possible by your example.

And then… pay me back. LOL

But the Oz story is really about Amanda and April and this group. It is an allegory of life with many, metaphors, analogies and symbolic characters and events woven into it.

Again, it is about a journey of self-actualization to enlightenment and confidence. It’s primarily a journey of discovery where the characters succeed by overcoming their own short-comings. They also have to work together using each other’s strength to get there.

Even before leaving Kansas we see the symbolic character analogies:

In the final scene of the movie are the most important lines:

So here we are over the rainbow where blue birds fly with Amanda and April. I know that every one of those characters in the movie also are real characters in Amanda and April’s journey on their yellow brick road and are here today or you know them from the past. So I would like to have some fun and have a little contest through the rest of the day and reception. I am putting up a $ 500 reward for the best matches to the OZ characters from Amanda’s and April’s friends and acquaintances or past enemies. We can have one for the best matches and one for the funniest.  Amanda and April will be the judges. I suggest you put it in your SM or blogs as it will be get a lot likes and followers.

So who amongst their friends here today is the:

Here is to the past for all that you have experienced and learned!

Here is to the Present for all that you share together.

Here is to the future for all that you have to look forward to.

And to make it last:

Whenever you are wrong admit it.

Whenever you are right –Shut Up!

Here is to Amanda and April!